Trigeminal neuralgia - sometimes refered to as tic douloureux - has been described as the most excruciating pain known to humanity. The trigeminal nerve is the largest of the cranial nerves. This nerve mainly innervates the ears, nose, throat and the autonomic nervous system (these are the nerves that control automatic functions of your body, such as your heart rate, breathing, digestive system, etc.).

The cranial nerves originate in the brainstem, this is the area of the spine that is surrounded and protected by the upper-cervical spine (occiput, atlas and axis).

The trigeminal nerve innovates the muscles used to chew (the muscles of mastication) and the skin over the front of the face as seen in the picture.

Trigeminal neuralgia is a chronic condition that has accute exacerbations that comes from pressure on this nerve and causes shooting pain into the jaw that is described as excruciating and debilitating. This pain usually effects one side of the face but can effect both, usually not both at the same time.The pain usually lasts from a few seconds to a couple of minutes but can last longer in severe cases.

The attacks usually start unexpectedly or can be triggered by something that shouldn't cause the level of pain that it does. Some of these triggers include; talking, smiling, chewing, brushing your teeth, washing your face, a light touch, shaving or putting on make-up, swallowing, kissing, a cool breeze or air conditioning, head movements, vibrations, such as walking or travelling in a car. 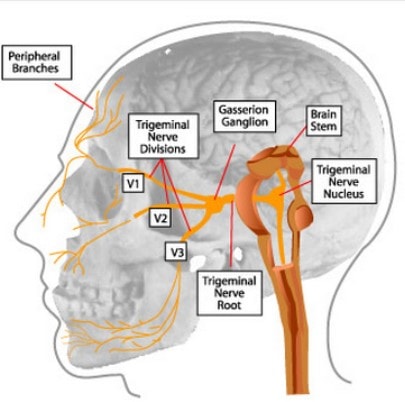 Chiropractic care is certainly not a treatment for these symptoms, but correcting this area of the spine can allow the body to start functioning at a better level so it can start the process of healing from this painful and debilitating condition.

If you have, or know someone with trigeminal neuralgia and haven't had your upper-cervical spine checked, please feel free to book in a call with me and we may be able to help you find a solution to your problem.

For more information on upper-cervical chiropractic, please check out out blog or subscribe below.